Part I. The Source

Part I:     The Source
Beginnings get a lot of press when it comes to the creative process. There’s something mystical about taking those first tentative steps toward a new creative journey. Maybe it’s because the path ahead is unknown and potentially dangerous. Maybe it’s because we don’t know who or what we’ll encounter along the way. All we can only hope is that we’ll be changed for the better once we get to the other side. This is the hero’s journey, and it starts with one step. It’s the stuff of legends. www.meaningwant.wordpress.com/2010/11/12/after-the-beginning-advice-for-keeping-your-creative-journey-alive
--Jamie Hahn

As many people in the world have undoubtedly fantasized, perhaps serially or at least once, I have imagined what it would be like to stand on the stage, being broadcast to billions of people accepting an Oscar (www.oscars.org) and wondered what I would say at the time that pure moment came.  While there are always many people to thank in what is nothing if not a collaborative art form, and friends and family who carried us along and propped up our spirits as we foundered and lost course, I think that I would have to thank a few specific people who helped set my compass course, from separate perches and points in time.
The first would be Dr. W.I. Peterman at New Trier High School in Winnetka, Illinois (www.newtrier.k12.il.us) for the inspiration that he gave through his  music and performing arts department (www.newtrier.k12.il.us/page.aspx?id=4868), where I sang in various choruses such as The Troubadours, the Boys Ensemble, performed on stage in musicals such as Of Thee I Sing, took voice lessons and began a personal journey of  artistic self-expression that made me believe that a part of myself could indeed be "creative" and "expressive." 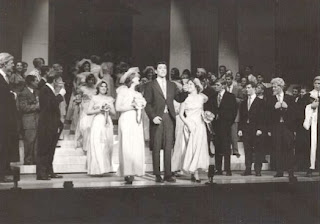 The second would be David McKendall, the English Department teacher at New Trier who first shared with us the lure of story-telling on the silver screen by screening black-and-white classics such as Sergei Eisenstein's Potemkin (www.en.wikipedia.org/wiki/The_Battleship_Potemkin) in class. I also learned about actually making movies with the class' 16mm production of a student film called Skateboard. Cinematic visual narration and character development were born in this forum for me.
The third, and final person for those sacred few "fantasy" moments would be Julia Cameron, my fellow Georgetown University (www.english.georgetown.edu) English-major colleague, also from Chicago but whom I would first meet, in a moment of "synchronicity," many years later at a Manhattan party steeped with Ford Models.  It was Julia who really tipped the scales in my life, when by that point I had become a partner in an entertainment law firm in New York City.  It was Julia next to whom I sat and asked what she did. She said to me "I teach creativity."  I asked her if she had read that seminal book about which I had heard so much called The Artist's Way. She looked at me as if I were putting her on and replied, "Well yes, I wrote it."  (www.theartistsway.com). That was the beginning of a beautiful friendship (www.en.wikipedia.org/wiki/Casablanca_(film) that has inspired me ever since.
So what I believe I would say, but won't know for sure until such time as I might be blessed with the chance to accept an Oscar for my artistic work, is "Thank you, Julia, for helping me find my artist's way."
© 2011 by William Nix. All rights reserved.
Posted by The Creative Incubator for Entertainment, Media and Sports at 3:24 PM